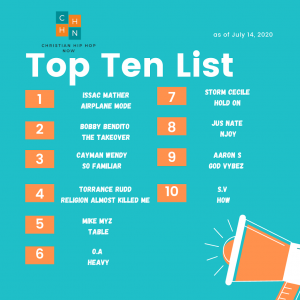 This week we have a shake up on the weekly charts and THIS RIGHT HERE is a shocker!  Issac Mather jumped up to number 1 with his new single, “Airplane Mode”. This is Issac Mather’s first number one single on the CHH Now charts! His last single, “Need Your Love” was number 5 on the May 25th chart. Bobby Bendito jumped back up to number 2, while Torrance Rudd’s, “Religion Almost Killed Me” dropped 2 spots to number 4. Newcomer, Cayman Wendy, jumped all the way to number 3 with his song, “So Famliar”. Mike Myz is also a new comer with his single ” Table” coming in at number 5. O.A jumped to number six with “Heavy”. Storm Cecile slipped to number 7 on the list, while Jus Nate re-entered the charts with “Njoy”! New to the CHH Now Charts, we have Aaron S with “God Vybez” and S.V remaining at the number 10 spot with “How”.
This week’s honorable mentions are
JayKnight, “Never Change” and Maali P, “Holding Down Hope”.