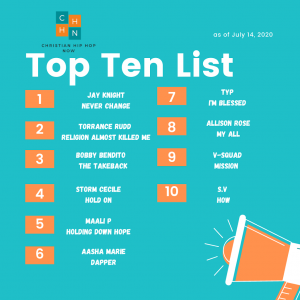 Another week down and we have our brand new top ten list for CHH Now.  Last two weeks we took a break for lack of votes and playlist submission for the top ten list but, this weeks charts show Jay Knight claiming the number 1 spots with”Never Change”.  Torrance Rudd’s  “Religion Almost Killed Me” dipped down to number 2 on the charts.  Bobby Bendito “The Takeback” slipped to the number 3 slot.  Storm Cecile “Hold On” drop a spot as well to number 4.  Maali P “Holding Down Hope” also jumped 2 spots to number 5 spot for this week. Allison Rose “My All” jumped back into the top ten as well. This week we have a few new entry in the CHH Now charts with Aasha Mariah “Dapper” TYP “I’m Blessed” V-Squad “Mission” and S.V with his second song of the year to hit the charts “How”

Want to know when the next list drops?  Tune in every Tuesday as CHH Now releases the next top ten.
Honorable Mentions: Just Robert- On The Clock